We need visual identity & Brand stories we can grow with & into but they still must align with who we are as a person.
It was imperative Leannes identity not only matched the quality of her service but overall would embody her compassionate, genuine & passionate personality.
A focal point: The ability to position 2020 Wealth with the aim of; firstly becoming the local go-to & further more have a solid, consistent look & feel to branch out into a wider location with no issues of outgrowing her identity. 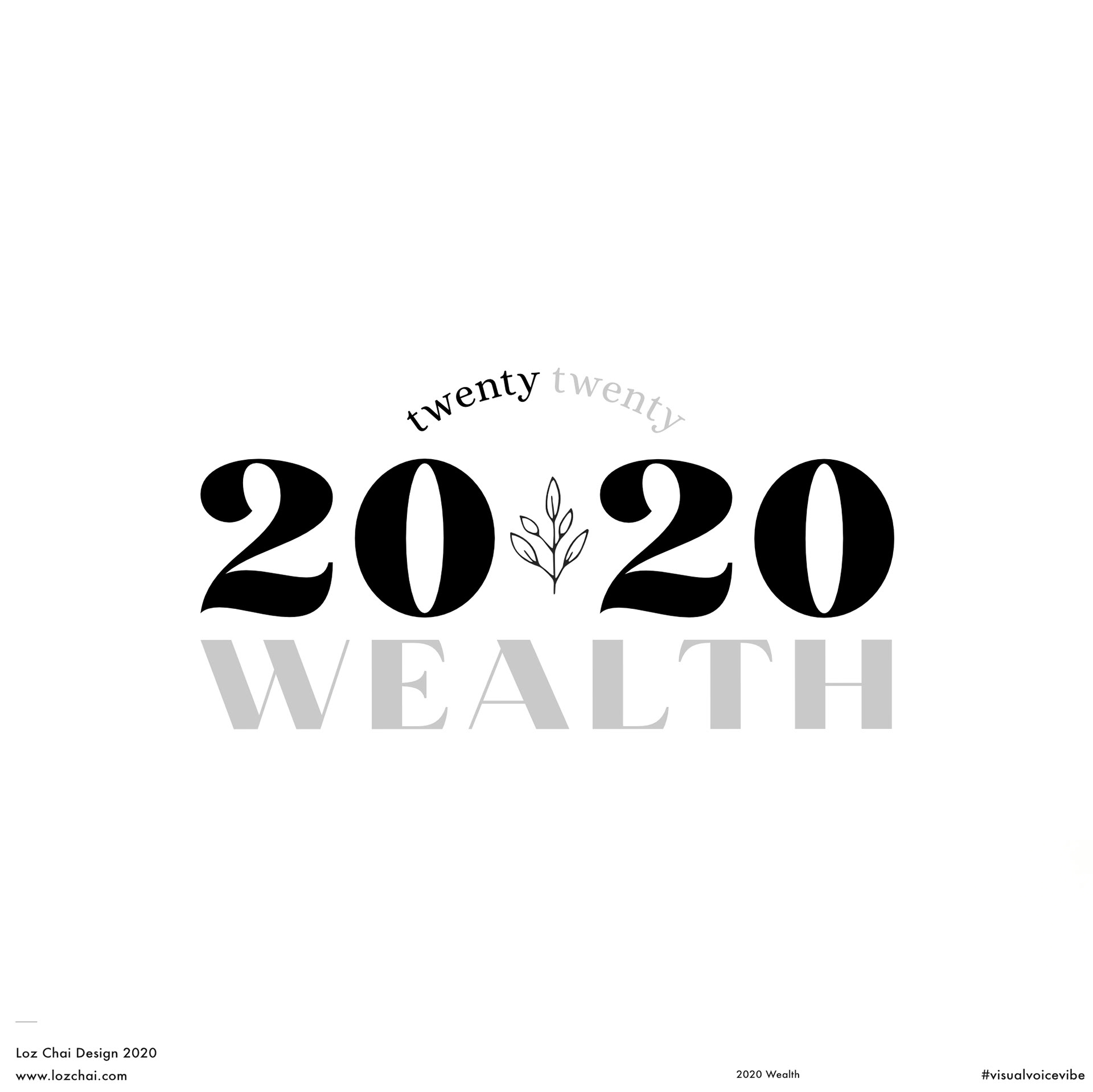 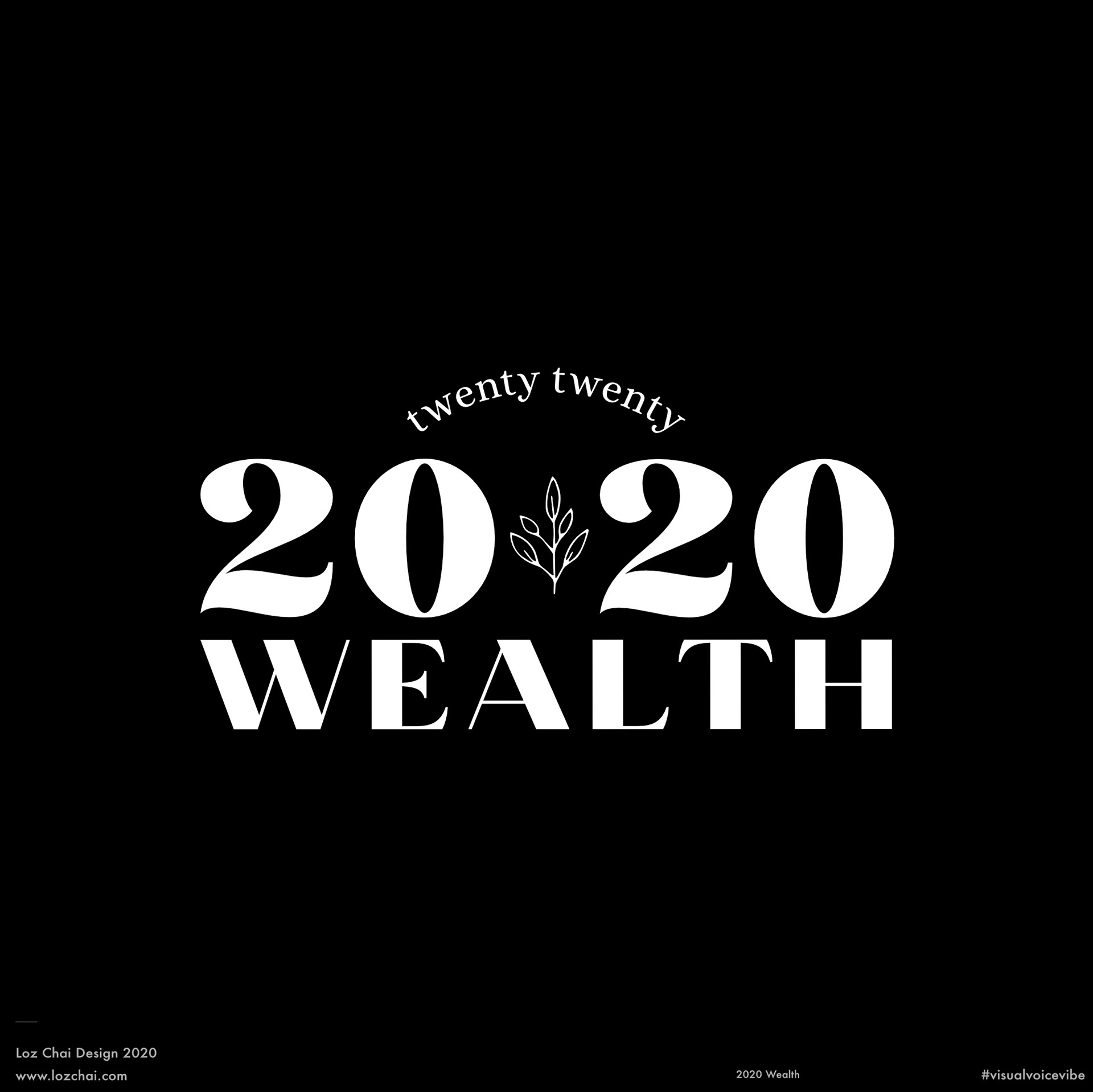 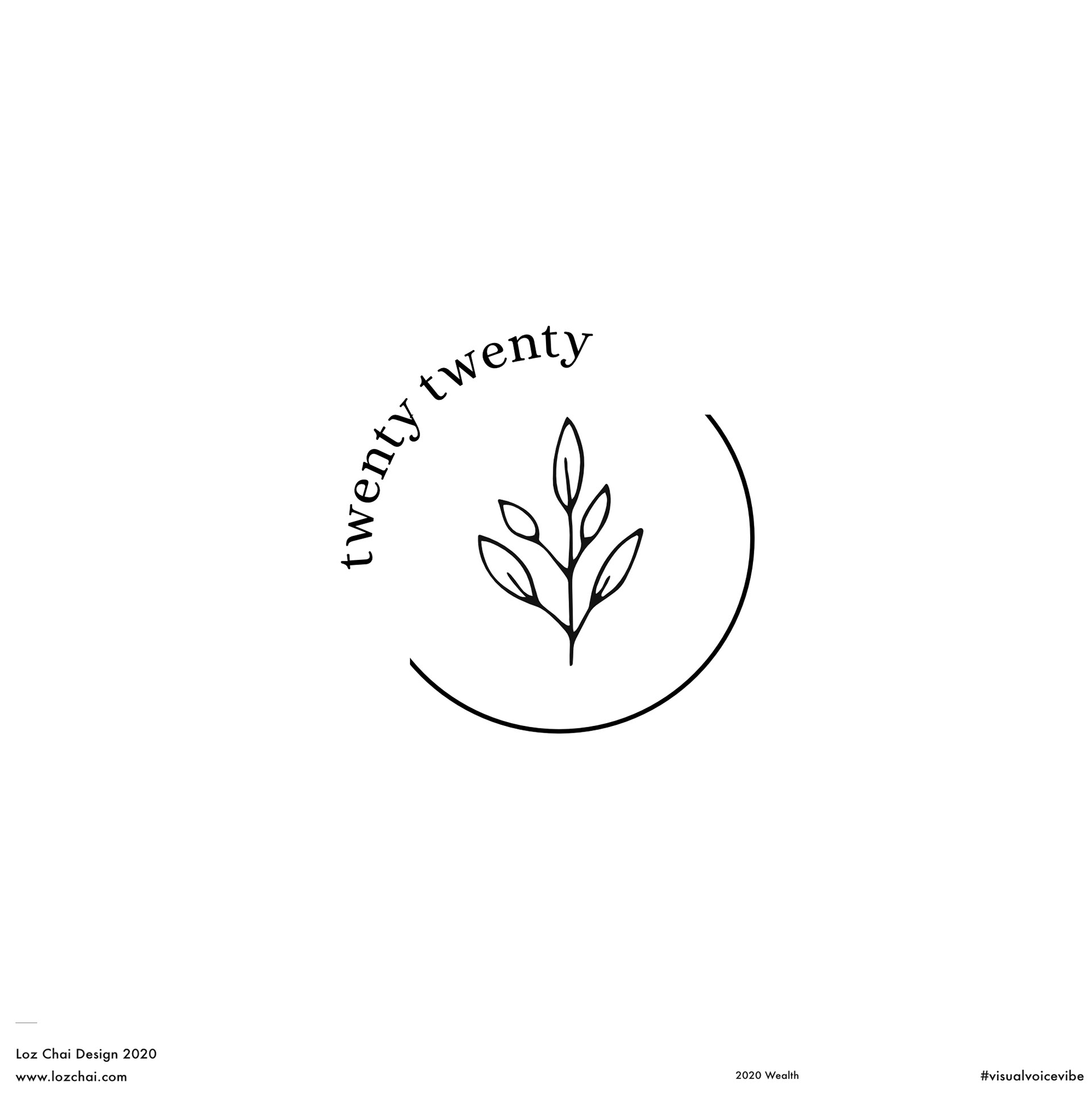 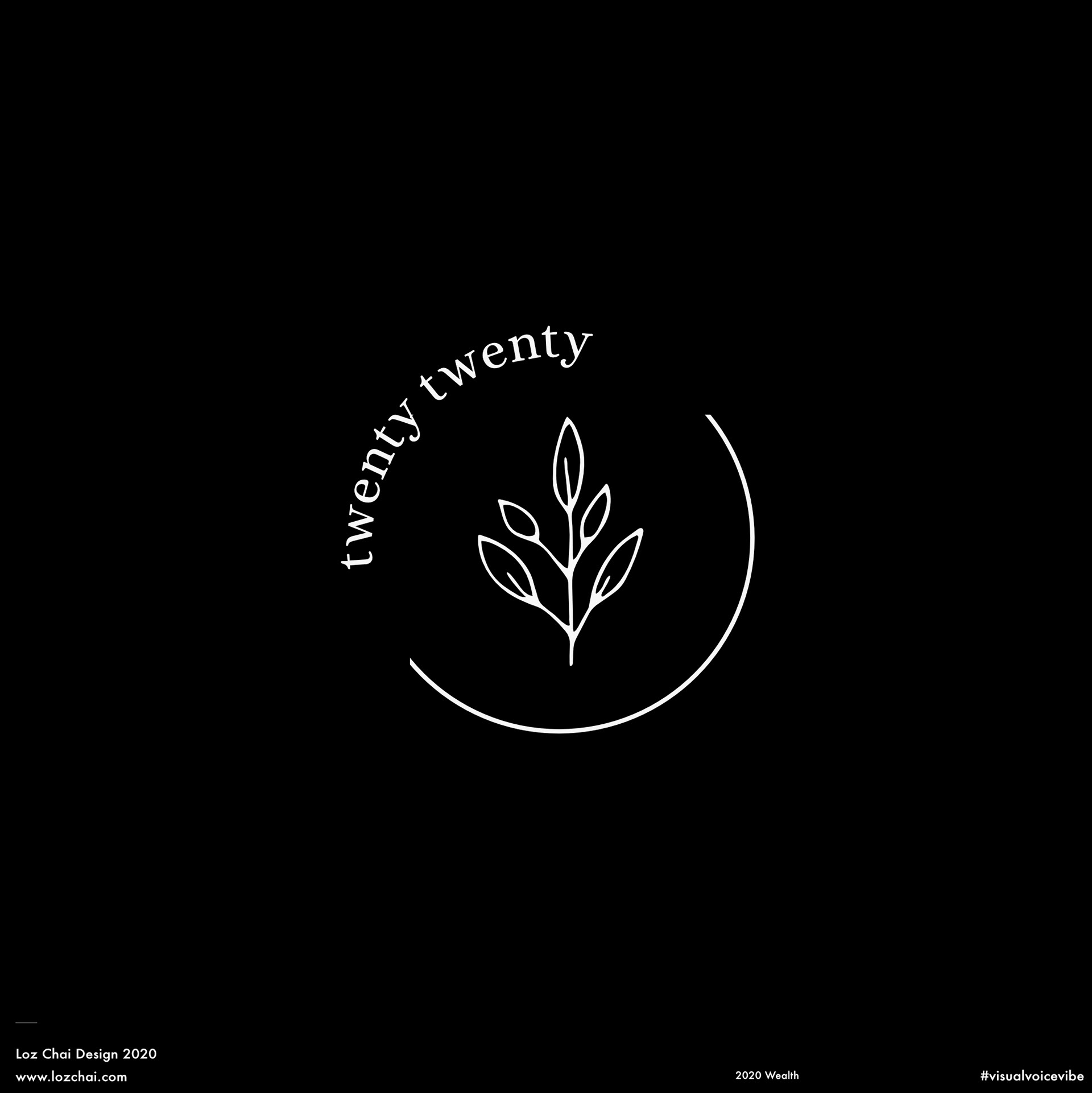 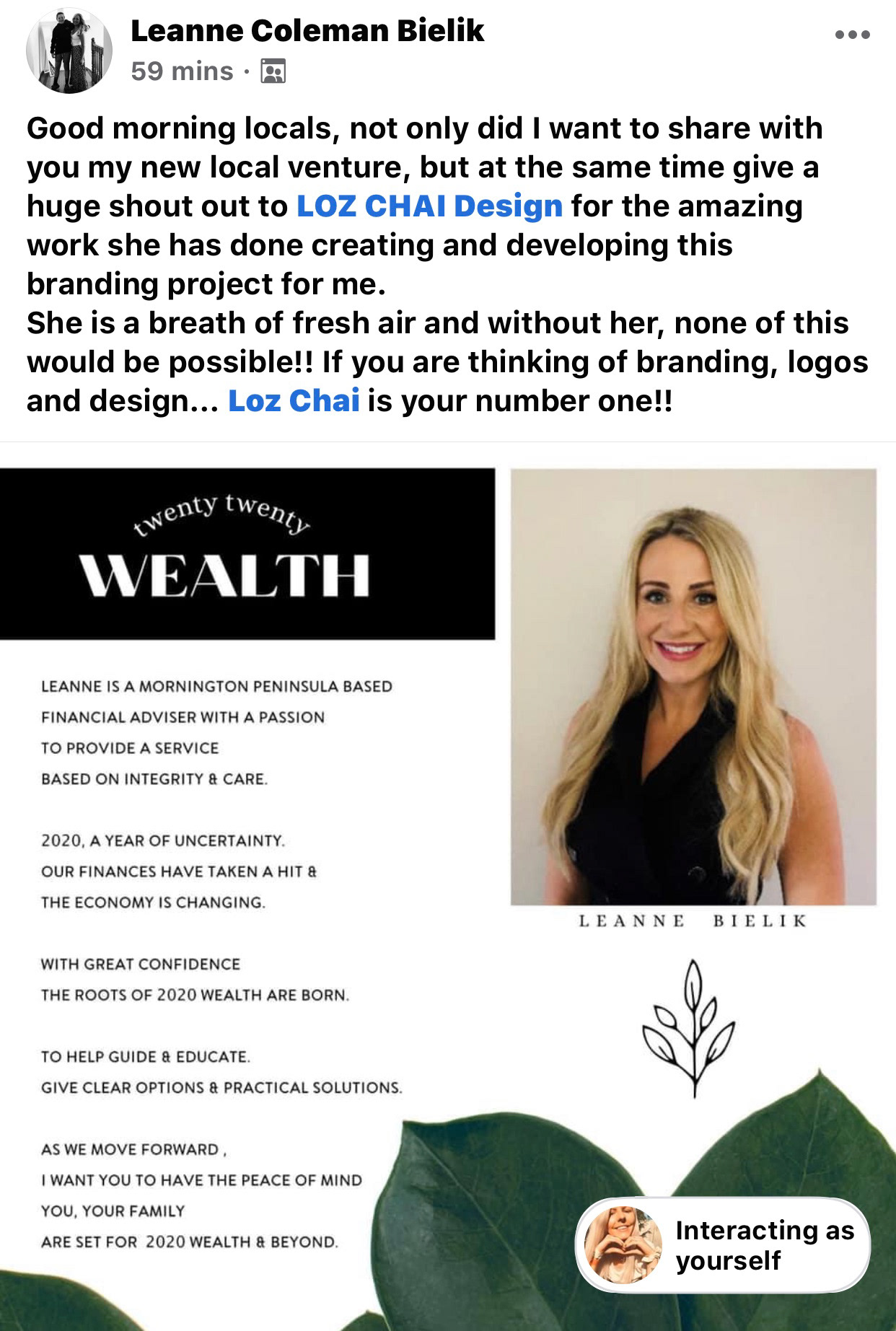 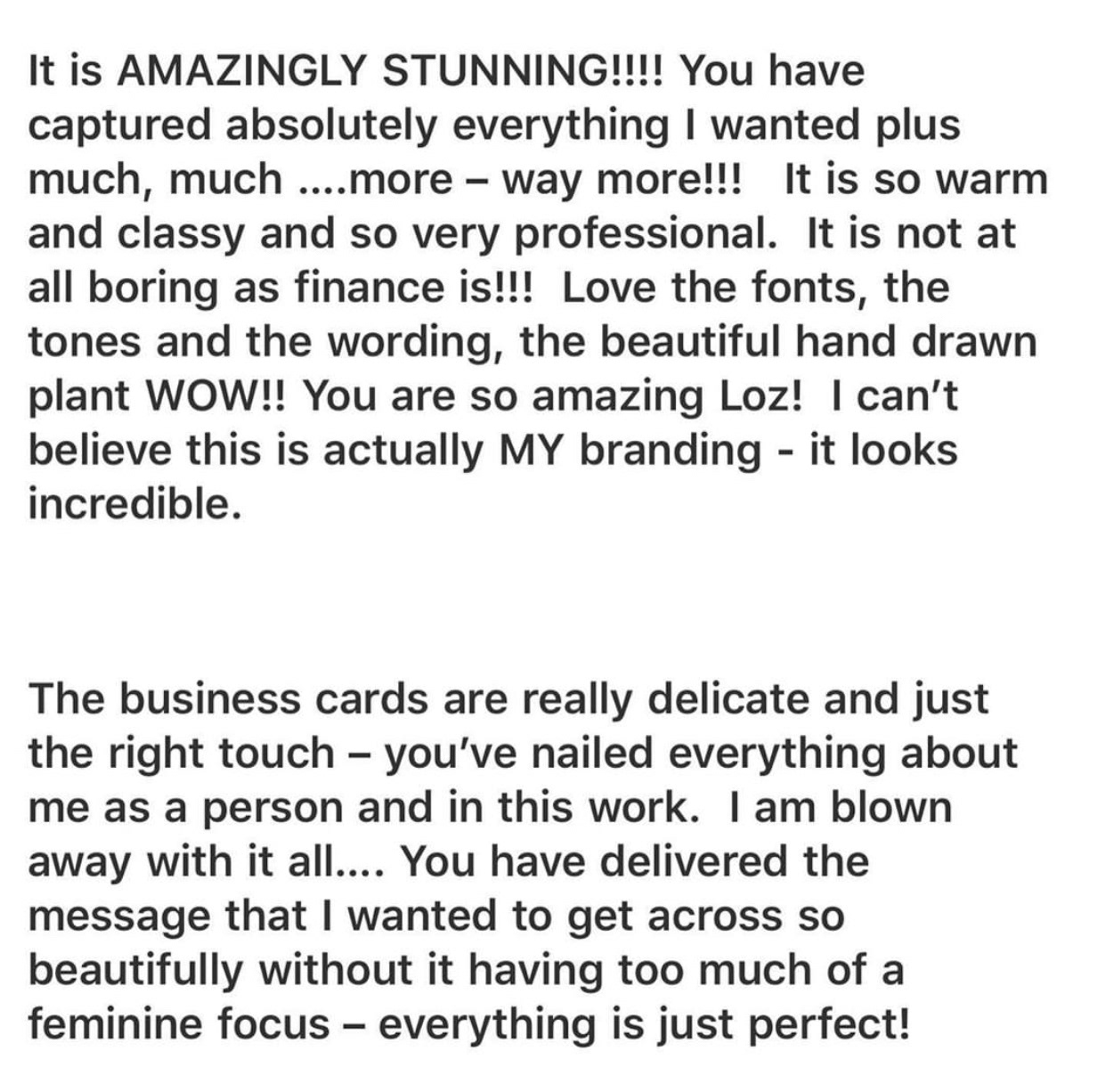 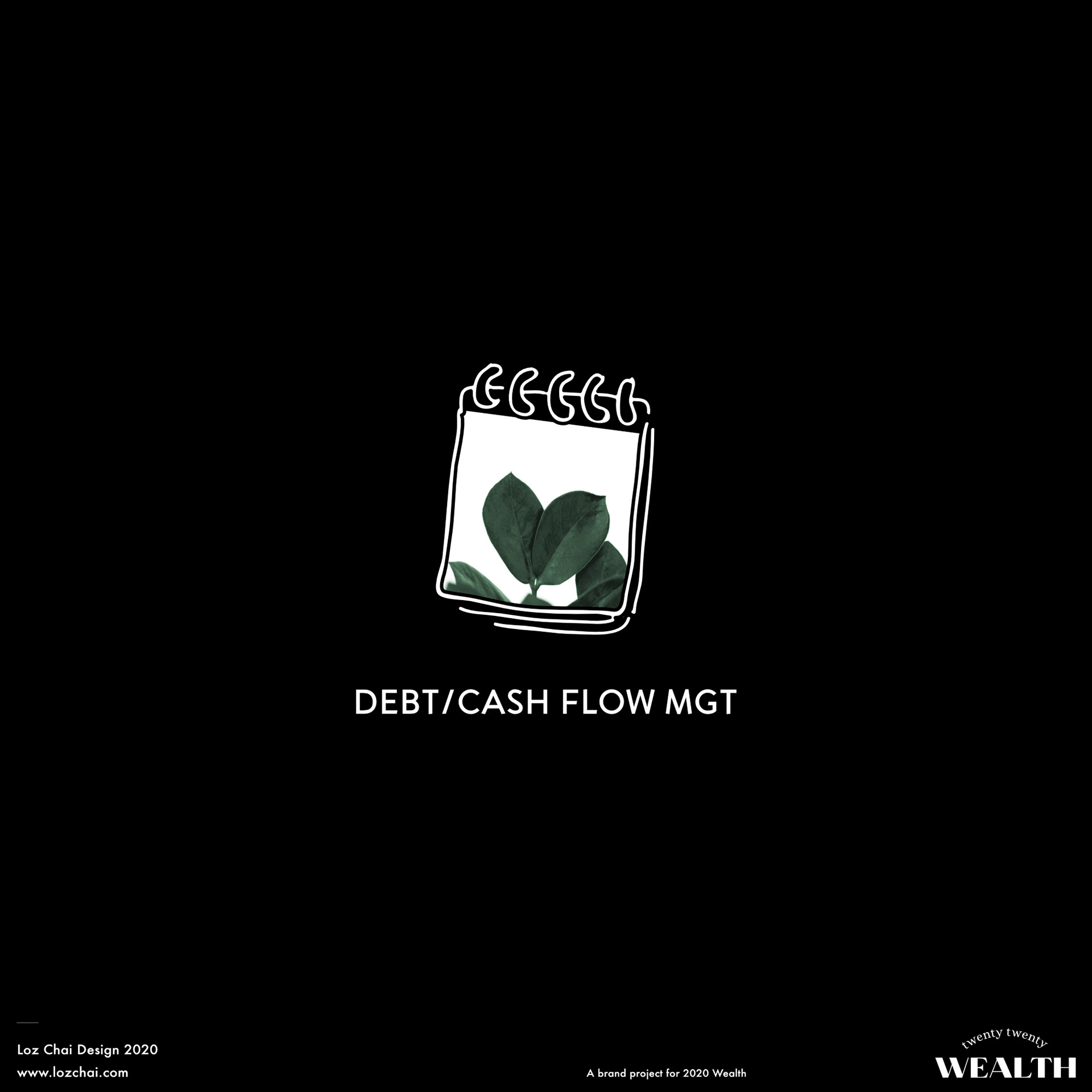 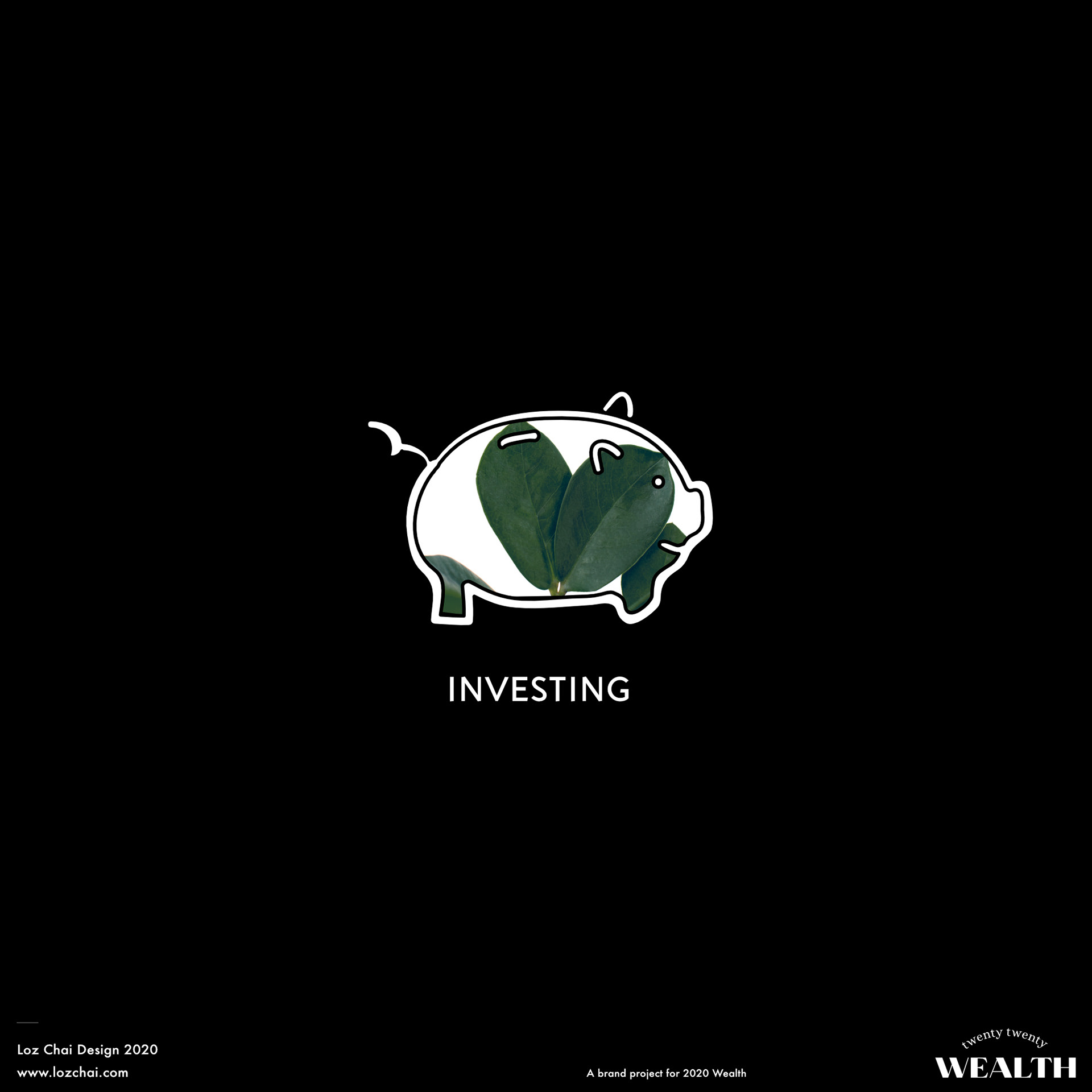 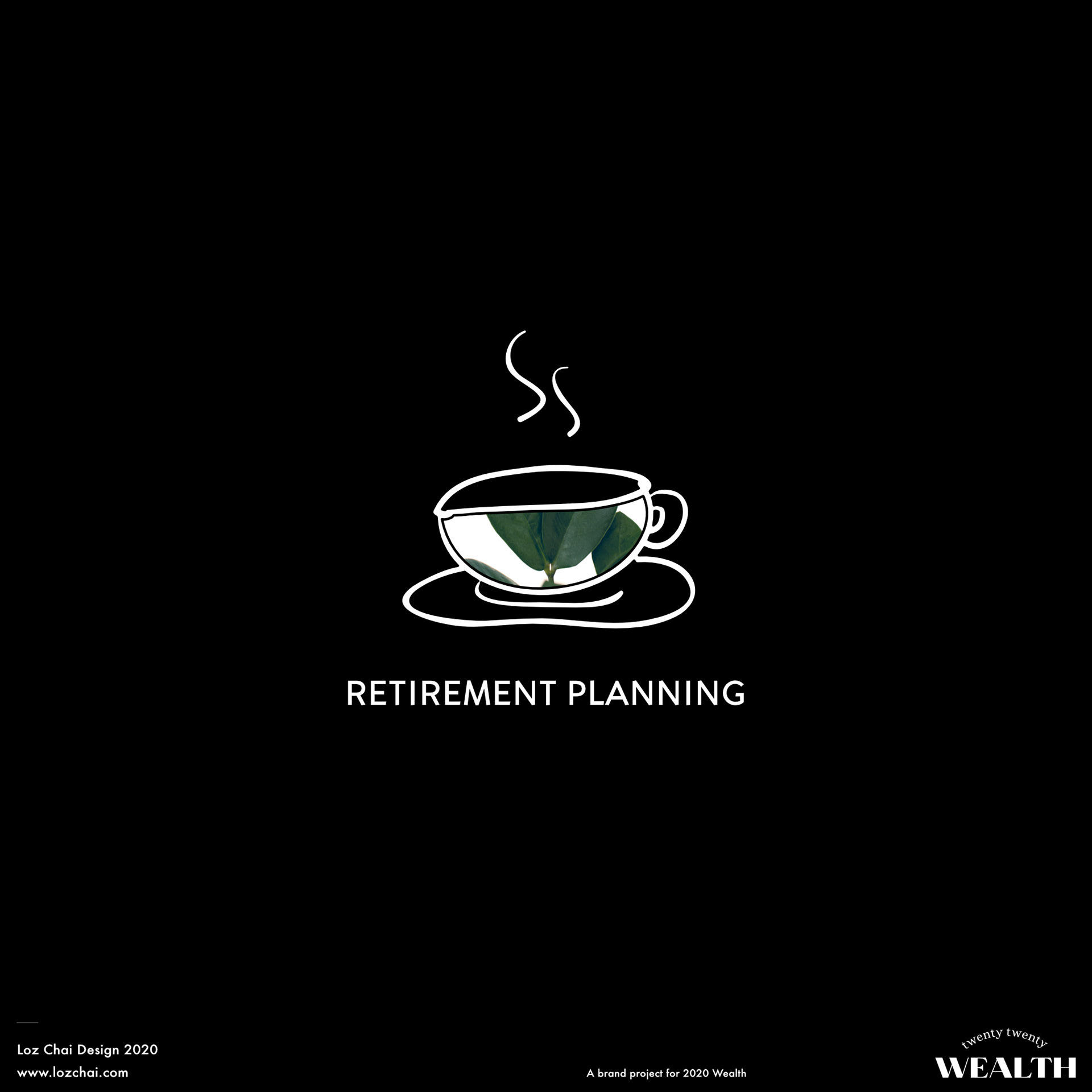 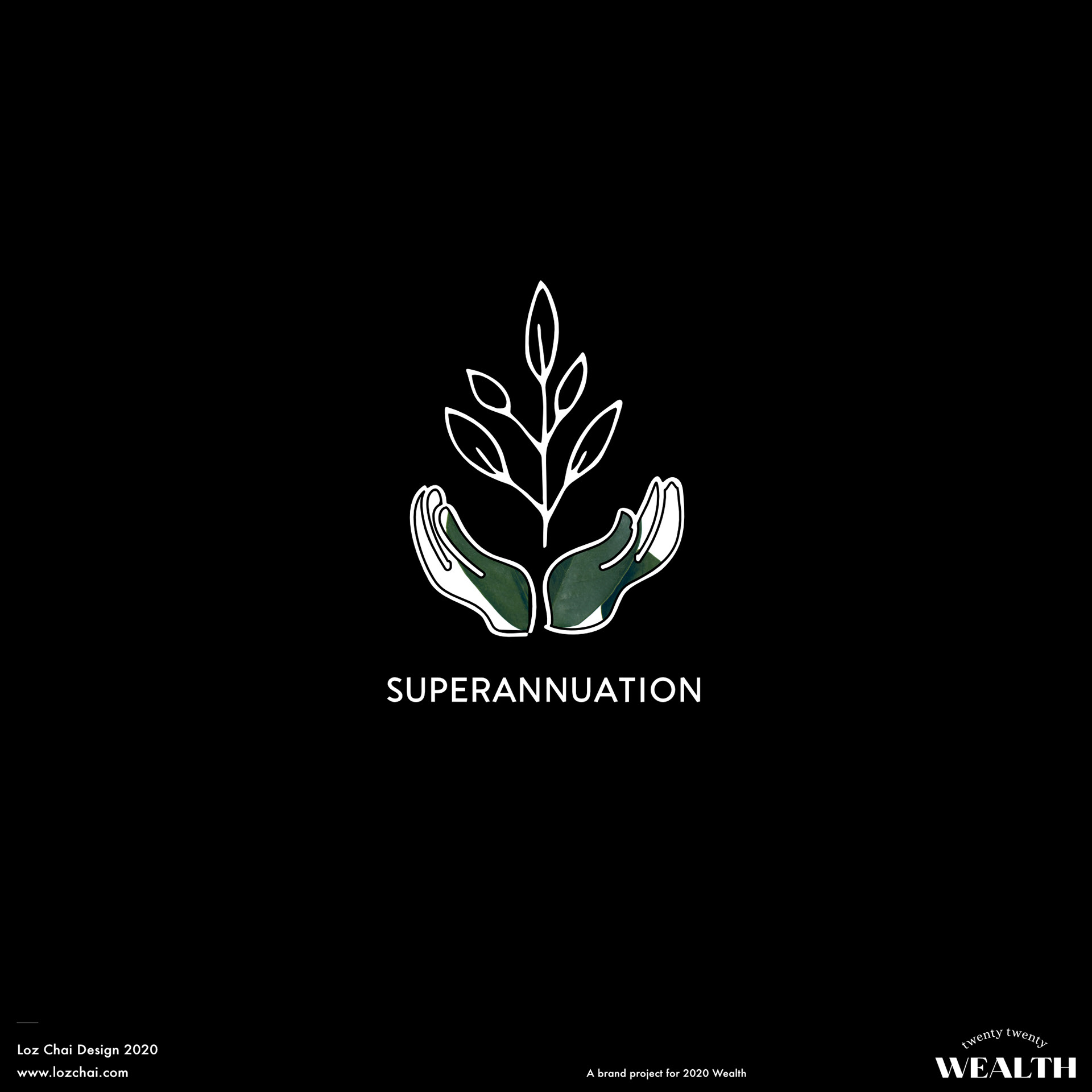 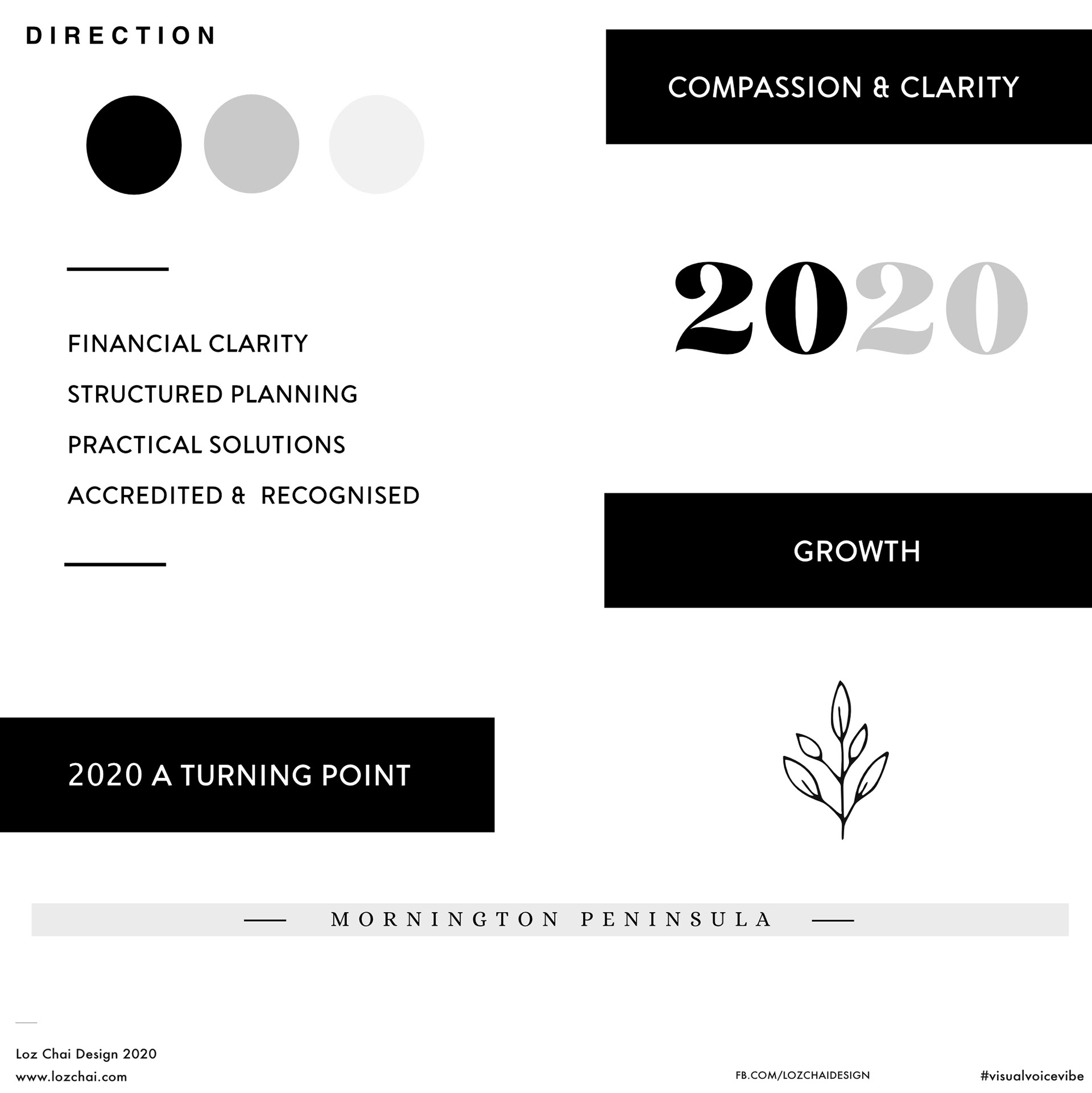 One of the first story boards I created from what I had learnt about Leanne & her vision. I was aiming to kick off with a clean, slightly feminine but still appealing (unisex) direction. I wanted to bring in the feminine touch because this is Leannes identity , so representing who she is - a major focal point. The descriptive words are from "Thought Creatives" which are ideation during the discovery phase! These are statements which are relatable to Leannes service but worded simple & clear. Further "Thought Creatives" can be seen in following story board.

Above: (direction story board)
One of the first story boards created from what I had learnt about Leanne & her vision. Aiming to kick off with a clean, a slight feminine touch but still appealing (unisex) direction. Leanne mentioned how she didn't want it to be overly feminine & this is how I felt I could achieve this for her because ultimately this is Leannes identity, so representing who she is - a major focal point. We need visual identity & Brand stories we can grow with & into but they still must align with who we are as a person. It was imperative Leannes identity not only matched the quality of her service but overall would embody her personality, have the ability to position her with the aim of; firstly becoming the local go-to & further more have a solid, consistent look & feel to branch out into a wider location with no issues of outgrowing her identity.
The colour pallet
Traditional & timeless, the addition of grey to contrast & allow for further versatility.
The descriptive words
"Thought Creatives" ,  ideation during the discovery phase! These are statements relatable to Leannes service but worded simply for clear understanding of what Leanne offers.
The words
Surrounded by black boxes are also TC's included to help me during the brainstorming phase.
Plant sprig:
Represents , the money plant! I spent some time really digging deeper to birth an element which would relate to her target audience / community , the money plant came to mind! The story: When I was younger my dad had a money plant which sat on our kitchen bench, I remember asking my dad what sort it was - he said it was to help attract good financial stability & money into our life! With 30 - 65 year old females being one of Leannes primary clients & as I fall into this bracket also I thought what. great piece to include in the brand development, so I drew up a simple sprig making sure it wasn't straight & sharp as I wanted that personal level within the visual. Once I shared this with Leanne she was over the moon & stated that her dad ALSO had a money plant. This is not only part of her visual identity , it holds meaning to Leanne & as soon as I started drafting the logo I automatically had a vision of the plant spring being part of the logo - it worked & suits the primary logo perfectly!
Further "Thought Creatives" can be seen in following story board.

Above : "Thought Creatives"
A written statement
Positioning Leanne as the expert she is. Incorporating warm words & descriptions with emotion.
Identities
Should tell a story, so this is a foundation of vision & an ending that speaks her ultimate mission, wanting people to know that she can assist with the peace of mind when it comes to finances & will help you get set for 2020 wealth & beyond.  I wanted to repeat the use of 2020 wealth, hence the reason of incorporating her business name as a play in the written copy.
All such statements
Within the brainstorming of "Thought Creative" phase are laying a foundation for voice. The statements & descriptive words can be utilised within content copy, marketing goodies, collateral such as brochures, promo posters & more.

Interested in knowing more about the development & design of your Visual + Voice + Vibe ?
If you'd like to get the conversation started please fill out the form below & I will get back to you with a copy of my creative offerings welcome booklet & answer any question you may have.
No stress or pressure with me. I am not here to sell to you, but to listen & provide you with all the transparent detailed information you require, so you can decide if I'm the fitting creative for you!
If you'd like to see what my client fams are saying you can check out further testimonials on my facebook page ,by clicking RIGHT HERE
Loz x
Also please note,
Thank you for contacting Loz Chai Design I will get back to you as soon as possible! If you'd like to chat sooner please text 040 849 185
View part 1 of 2020 Wealth

Modern & Chic [Pt 1]
A Brand project for Modeb & Chic, an online store operating from the Mornington Peninsula. Modern & Chic offers design led home wares & products to inspire your homes surroundings. The project consisted of developing & designing not only an array of visuals including logos/marks/iconography/pattern & all the amazing graphics that identity a business but a brand story. Bringing contextual meaning from the heart of the human behind the business to connect with customers & audience. This is part 1.

Peninsula Outdoor Cinema [ Pt 1]
A collection of the new identity pre-reveal content posts designed to share in the lead up to Outdoor Cinema Hire launch.. Showcasing icons and fonts all are which are part of their visual identity.

Peninsula Palooza Package. The Poster Design
Working with Revolution Roasters, a well known coffee roaster company in Melbourne I was hired to work the design magic for their really cool project. An essentials package for people to purchase while we ride this wave of pandemic life! Includes locally sourced products from Mornington Peninsula business & all profits donated to Frankston Hospital. This is the poster /activation design art-work & illustrations for that package!

SMILE ART PRODUCT BOOKLET
A 16 Page product booklet designed and printed for Smile Art to market and showcase their product to dental clinics. 100% custom made no pre purchased templates. Design built from client brief thoughts into a printed quality booklet.